Dear Visitor, this is an outdated version of our website. Although we continue maintaining it, you are more than welcome to visit our new portal containing yet more images and information about Bukovyna. To navigate to the new version of this page, please, click here: http://bukovyna.in.ua/bukovyna.html 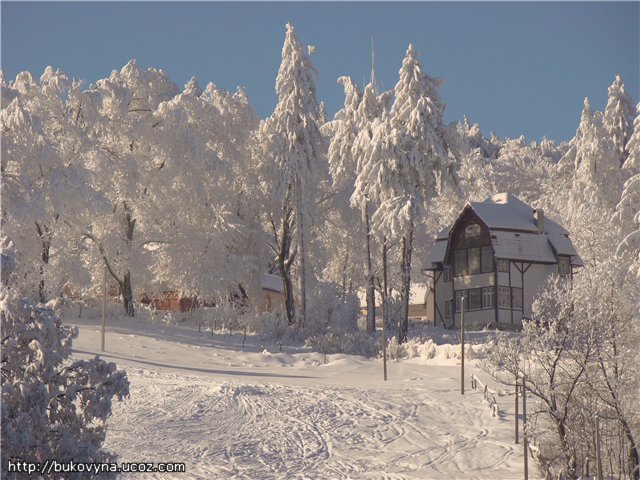 Bukovyna (Ukrainian: Буковина/Bukovyna; Russian: Буковина/Bukovina; Romanian: Bucovina; German and Polish: Bukowina) is a historical region on the northern slopes of the northeastern Carpathian Mountains and the adjoining plains. It is currently split between Romania and Ukraine.

The name Bukovyna came into official use in 1775 with the region's annexation from the Principality of Moldavia to the possessions of the Habsburg Monarchy, which became Austrian Empire in 1804, and Austria-Hungary in 1867.

The official German name, die Bukowina, of the province under Austrian rule (1775–1918), was derived from the Polish form Bukowina, which in turn comes from the common Slavic form Bukowina, which stands for beech tree (бук [buk] as, for example, in Ukrainian or, even, Buche in German). Another German name for the region, das Buchenland, is mostly used in poetry, and means "beech land", or "the land of beech trees". In Romanian, in literary or poetic contexts, the name Ţara Fagilor ("the land of beech trees") is sometimes used.

Nowadays in Ukraine the name is unofficial, but is common when referring to the Chernivtsi Oblast as over 2/3 of the oblast is the northern part of Bukovina. In Romania the term Northern Bucovina is sometimes synonymous to the entire Chernivtsi Oblast of Ukraine, and (Southern) Bucovina to Suceava County of Romania. (Note: Currently 10% of the Suceava County covers territory outside of the historical Bukovina.)

In English, an alternate form is The Bukovina, increasingly an archaism, which, however, is found in older literature.

Chernivtsi Oblast  is an oblast (province) of Western Ukraine bordering on Romania and Moldova. It has a large variety of landforms: the Carpathian Mountains and picturesque hills at the foot of the mountains gradually change to a broad partly forested plain situated between the Dniester and Prut rivers. Its capital is the city Chernivtsi. The region has a population (as of 2004-05-01) of 913,275 and spans 8,100 km².Contents [hide]

The oblast covers an area of 8,097 km² being the smallest oblast in Ukraine representing 1.3% of Ukraine’s territory.

Chernivtsi oblast borders on Ivano-Frankivsk Oblast, Ternopil Oblast, Khmelnytskyi Oblast, Vinnytsia Oblast, Romania, and Moldova. Within the oblast the national border of Ukraine with Romania extends for 226 km, and with Moldova for 198 km.

The Oblast has the following 11 administrative districts: