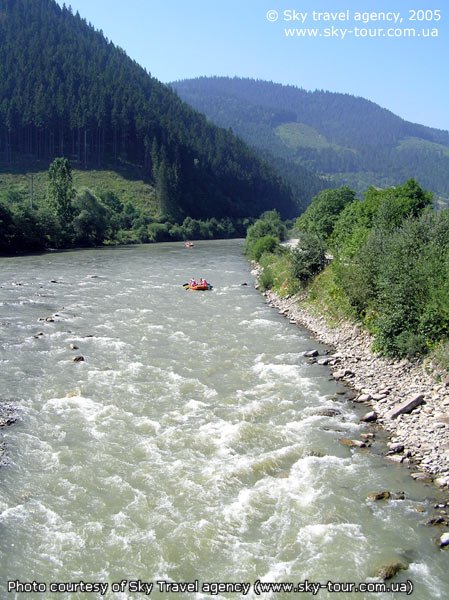 If you like adrenaline buzz, water, speed or just beautiful nature you’ll adore rafting. Bukovynian rivers – the Cheremosh, Prut and Dnister – are perfect for this kind of sport, especially when accompanied by an experienced instructor.

You’ll experience plenty of impressions when passing through river rapids, enjoy viewing vivid riversides and green mountain slopes. Even more – you’ll spend a wonderful weekend or vacation breathing with clean mountain air, taking rest from the dusty city and troubles and recreating yourself.

There are three basic opportunities for rafting in Bukovyna

The Cheremosh river starts at the place of confluence of the Black and White Cheremosh rivers next to Usteriki settlement in Ivano-Frankivsk oblast and joins the Prut near Zeleniv in Chernivtsi oblast. The river length is about 80 km. In its upper part the Cheremosh flows in mountains and the flow speed reaches 15km/h organizing twisting channel with numerous rapids and rifts. Near Vyzhnytsya the river becomes broader, plain and slows down to 7-8 km/h. Here starts the route.

The Prut river starts in the Northern slopes of the Chornohora mountain ridge (the highest in the Ukrainian Carpatians) and brings its waters through Ivano-Frankivsk and Chernivtsi oblasts along borders with Rumania and Moldova into the Danube. The river is 967km long. The upper part of the river runs through mountainous areas, which influences its speed but its greater part below is plainer. The Prut has been recognized as one of the cleanest European rivers.

The total length of the Dnister is 1362km, 705 of which run through Ukraine. The Dnister starts on the North-Eastern slopes of the Ukrainian Carpathians in Lviv oblast and brings its waters through Ukraine and Moldova into the Black Sea. Vivid riversides show unique historical and natural sights – castles, monasteries, churches, ruins of ancient settlements, national parks, waterfalls, healing water sources, rocks, grottos and caves. As the Dnister valley was populated by ancient settlements during ancient times its banks have many more historical monuments than many other European rivers.

Kayaking and Rafting on the Cheremosh river